Why whiskey (and Selkirk) tastes better with a little water

(CNN)If anyone has suggested adding a little water to your whiskey, you may want to give it a try. Rather than watering it down, the addition may act as a flavor enhancement, and we now know the science behind it, thanks to a new study.

The combination is a bit counterintuitive, which is part of the reason researchers wanted to look at the molecular chemistry behind what’s happening in your whiskey glass.
On the surface, whiskey seems simple: It’s mostly barley malt and water that goes through a specific process. But from a chemistry standpoint, whiskey includes a complex variety of molecules that contribute to its unique taste. One of those is the compound guaiacol, which lends itself to the smokiness associated with some whiskeys.
Guaiacol is the molecule that two researchers from the Linnaeus University Center for Biomaterials Chemistry in Sweden focused on for their study, published Thursday in the journal Scientific Reports.
The researchers looked at both bottled and cask-strength whiskey. Bottled whiskey has been diluted to about 40% alcohol by volume, down from 70% after distilling. Cask whiskey is stronger, at about 55% to 65% alcohol by volume, even if some alcohol evaporates as it matures in barrels for at least three years.
What they discovered is that guaiacol is most present at the surface of diluted whiskey, which is why whiskey with added water tastes better: The taste molecules are at the top of your glass.
“From a molecular perspective, water and alcohol don’t completely mix,” co-author Ran Friedman wrote in an email. “Instead, we have clusters of water molecules and clusters of alcohol molecules. When whisky is diluted, the alcohol is driven to the surface, and many of the taste molecules follow it because they like to be in a slightly less aqueous environment. The taste that we experience is therefore enhanced — but there’s a limit. If we dilute the whisky too much the concentration of the taste compounds is reduced and the drink will be meager.”
In higher-alcohol whiskey, the flavor is different because the taste molecules aren’t reacting to the presence of water.

“The most interesting finding was that at high alcohol by volume concentrations — 59% and up, cask-strength whisky — the taste compound was surrounded by ethanol molecules in the solution,” Friedman wrote. 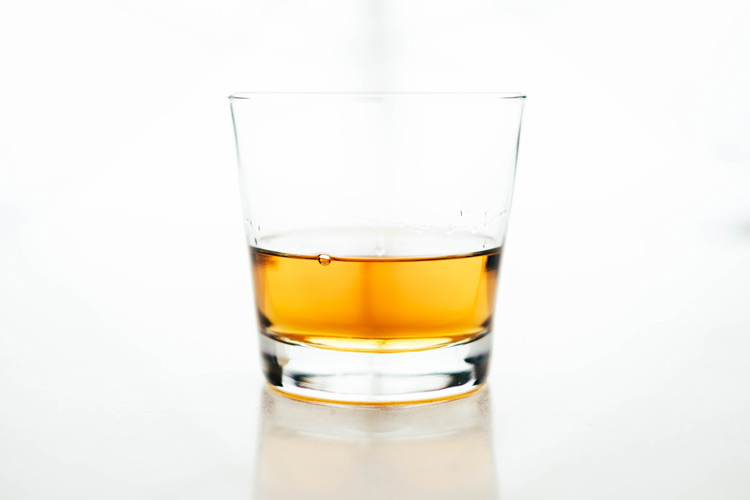 Friedman and colleague Bjorn Karlsson didn’t discover this through taste, although both like whiskey, but by using computer simulations of the molecules.
“They enable us to follow on chemical processes as if we’re watching a molecular movie. We usually work on problems that have something to do with biology or human health, but at some point got interested in understanding why dilution affects the taste of whisky,” Friedman said.
The researchers believe their findings can be applied to other aged spirits, like brandy, rum and tequila, because they have similar solutions, taste compounds and alcohol by volume.
Though they didn’t drink any whiskey during the study, the two researchers enjoy traditional Swedish snaps (what we might call schnapps), ice-cold and undiluted.
“We believe that the principles we describe are true for a long list of taste compounds,” Friedman said. “In that case, one can find an optimal alcohol content for a spirit to taste best for many drinkers. The conclusions may also apply for the food industry, as some extracts that are used in the industry are stored in diluted alcohol solutions.”

When it comes to whiskey and how best to enjoy it, it can be a very personal choice.

As a mixologist at the Bar at Husk Restaurant in Charleston, South Carolina, Rod Weaver likes to offer a pour of bourbon or rye whiskey in two ways: neat and over ice. “This approach allows the drinker to compare the two; one room temp, and the other throughout the natural dilution as the ice melts over time,” Weaver wrote in an email. “There will be considerable change as it ‘opens up.’ This can also happen with oxidation.”
But as a whiskey lover, he recommends becoming acquainted with the type of whiskey “just the way the maker intended” before changing it in any way, whether it’s “a 10-year plus, non-chill filtered, barrel-proof ‘Haz-Mat’ (over 140 proof) face-melting monster, or a 6-month-young local and grainy infant” whiskey.
He believes that Scots were most likely the first to dilute their whiskey in the glass, while blenders and distillers of whiskey decide how much to dilute their products individually.
“But the best way to taste bourbon is hot, straight out the bottle,” Weaver said. “Chew it around your mouth, swallow, and feel the Kentucky hug.”
LeNell Camacho Santa Ana, owner of LeNell’s Beverage Boutique in Alabama, tells people to drink whiskey however they like it best. She isn’t one to say there’s a “proper” way to drink.
She also sells her own brand of whiskey called Red Hook Rye, and includes a formula for how to add water to reduce proof in the packaging of her barrels. The formula comes from Chuck Cowdery’s book “Bourbon, Straight”.
“Divide the proof you have by the proof you want and subtract one,” she wrote in an email. “Multiply that number by the amount of whiskey you want to dilute and the result will be the amount of water to add. For example, to reduce 2 ounces of 135 proof whiskey to 100 proof, divide 135 by 100 and subtract one. Multiply that number by 2 ounces. You add 0.7 ounces water to 2 ounces Red Hook Rye to make it 100 proof.
“The only time I do highly recommend adding water is when drinking a cask-strength whiskey, a whiskey that has been bottled straight from the barrel to the bottle without addition of water,” Smothers said. “Those high proofs are fine for a sip to taste the power of the spirit; however, if you drink barrel-proof whiskeys, the strength could damage the lining of your esophagus, besides the fact you may end up with a nasty hangover.”
Originally published here. References to Selkirk added by Glass Vodka.

« Join us for Glass Boutique’s Open House! » Get Your Spirits before the 24th!

This error message is only visible to WordPress admins

Error: API requests are being delayed for this account. New posts will not be retrieved.

Make sure this account has posts available on instagram.com.

Error: admin-ajax.php test was not successful. Some features may not be available.

Please visit this page to troubleshoot.